In January 2015, my friend and collaborator Brian Belet and I presented Oiseaux de Même — an audio soundscape app created from recordings of birds — at the first Web Audio Conference. In this post I’d like to describe my experience of implementing this app using the Web Audio API, Twitter Bootstrap, Node.js, and REST APIs. 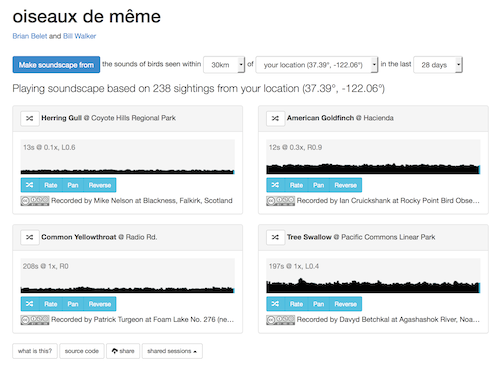 Screenshot showing Birds of a Feather, a soundscape created with field recordings of birds that are being seen in your vicinity.

What is it? Musique Concrète and citizen science

We wanted to create a web-based Musique Concrète, building an artistic sound experience by processing field recordings. We decided to use xeno-canto — a library of over 200,000 recordings of 9,000 different bird species — as our source of recordings. Almost all the recordings are licensed under Creative Commons by their generous recordists. We select recordings from this library based on data from eBird, a database of tens of millions of bird sightings contributed by bird watchers everywhere. By using the Geolocation API to retrieve eBird sightings near to the listeners’ location, our soundscape can consist of recordings of bird species that bird watchers have reported recently near the listener — each user gets a personalized soundscape that changes daily.

Use of the Web Audio API

We use the browser’s Web Audio API to play back the sounds from xeno-canto. The Web Audio API allows developers to play back, record, analyze, and process sound by creating AudioNodes that are connected together, like an old modular synthesizer.

Our soundscape is implemented using four AudioBuffer nodes, each of which plays a field recording in a loop. These loops are placed in a stereo field using Panner nodes, and mixed together before being sent to the listener’s speakers or headphones.

After all the sounds have loaded and begin playing, we offer users several controls for manipulating the sounds as they play:

The controls described above are implemented as typical JavaScript event handlers. When the Pan button is pressed, for example, we run this handler:

Some parts of the Web Audio API are write-only

I had a few minor issues where I had to work around shortcomings in the Web Audio API. Other authors have already documented similar experiences; I’ll summarize mine briefly here:

Debugging with the Web Audio inspector 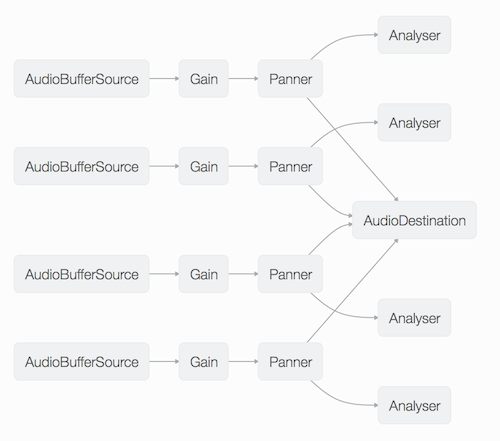 Firefox’s Web Audio inspector shows how Audio Nodes are connected to one another.

I had great success using Firefox’s Web Audio inspector to watch my Audio Nodes being created and interconnected as my code runs.

In the screenshot above, you can see the four AudioBufferSources, each feeding through a GainNode and PannerNode before being summed by an AudioDestination. Note that each recording is also connected to an AnalyzerNode; the Analyzers are used to create the scrolling amplitude graphs for each loop.

As the soundscape evolves, users often want to know which bird species is responsible for a particular sound they hear in the mix. We use a scrolling visualization for each loop that shows instantaneous amplitude, creating distinctive shapes you can correlate with what you’re hearing. The visualization uses the Analyzer node to perform a fast Fourier transform (FFT) on the sound, which yields the amplitude of the sound at every frequency. We compute the average of all those amplitudes, and then draw that amplitude at the right edge of a Canvas. As the contents of the Canvas shift sideways on every animation frame, the result is a horizontally scrolling amplitude graph.

I’m continuing to work on cleaning up my JavaScript code for this project. I have several user interface improvements suggested by my Mozillia colleagues that I’d like to try. And Prof. Belet and I are considering what other sources of geotagged sounds we can use to make more soundscapes with. In the meantime, please try Oiseaux de Même for yourself and let us know what you think!

examining the unexamined life of software
View all posts by wfwalker →
This entry was posted in Uncategorized. Bookmark the permalink.